How Might the Italian Debt Crisis Affect the Eurozone—and the Euro? 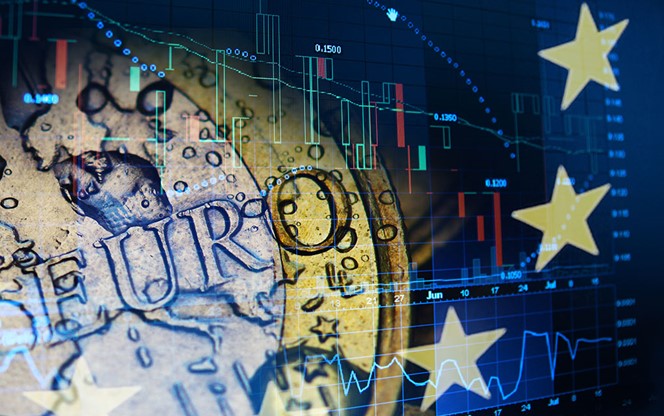 A continuing political crisis in Italy has had deep implications for Italian debt this year. What is behind this crisis and how might it affect the future of the euro?

The rise of Italy’s populist party and that party’s clashes with European Union (EU) rules has led to a budgetary standoff. This situation is leading to real risks surrounding Italy’s debt burden. 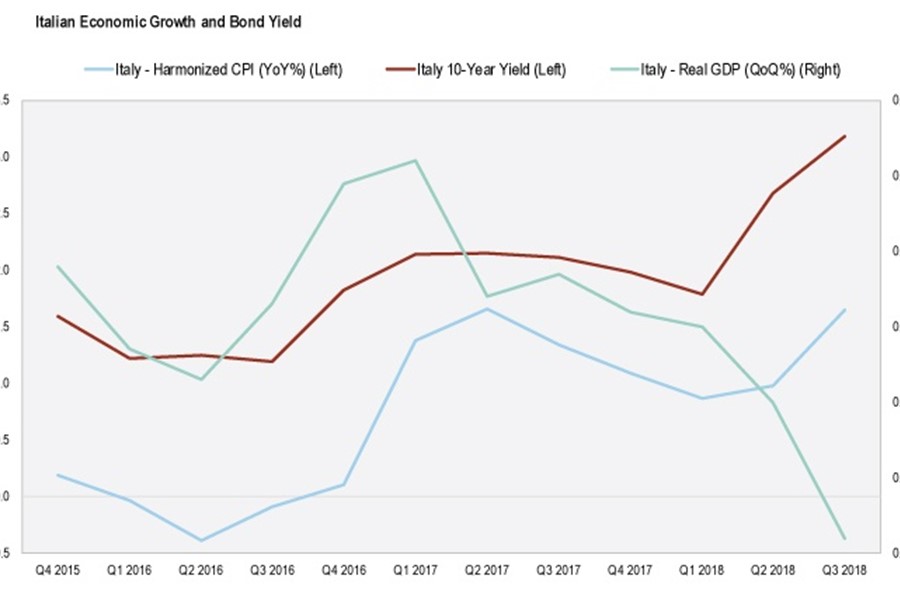 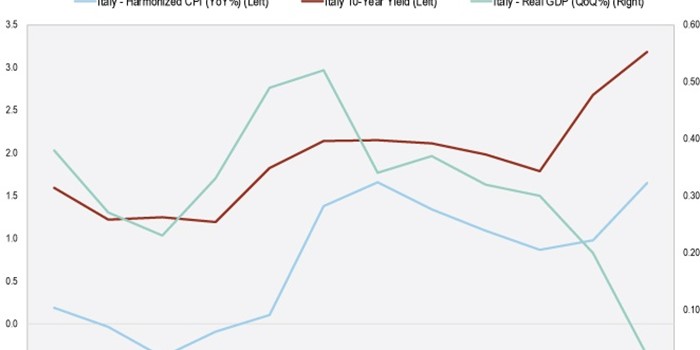 Italy’s populist coalition was formed in May 2018 on an “Italy first” platform that resonated positively with citizens trapped in an economy plagued by lackluster growth and high unemployment.

Under this anti-austerity regime, there is an unwillingness to adhere to EU rules governing member countries in the areas of leverage and budget deficit allowance.

Under EU rules, deficits are capped at 3% of GDP or debt is restricted beyond 60% of output, and governments are required to set annual targets to show they’re moving in the right direction.

Prior to May, Italy had agreed to a modest 0.8% deficit target, but that target rose to 2.4% of GDP for 2019 under the new populist government.

An official draft proposal to the governing Eurogroup (which is the name given to the finance ministers of the Eurozone when they hold informal meetings) was presented in Brussels on October 15th.  This draft budget was rejected on the grounds that Italy was turning its back on previous commitments from Rome.

Rome was given until November 13th to either revise its proposal or escalate a standoff with the Eurogroup.  The result was that Italy refused to budge, and now European commissioners need to figure out how to proceed. If the European Union (EU) gets fed up with Italy not meeting budget rules, it’s possible that Italy could be forced to accept sanctions (possibly billions of euros in fines) or leave the Union altogether (willingly or unwillingly).

Lenders already have plenty of reasons to fear potential deterioration in assets with Italy currently having a rating by Moody’s and S&P just two notches above junk.

How Will Italy’s Debt Woes Affect the Euro?

For broader Europe, the biggest concern about Italy’s struggles is with the impact this development will have on the shared euro currency.

Today, 22 member countries use this currency, which is the second most traded currency in the world after the U.S. dollar. 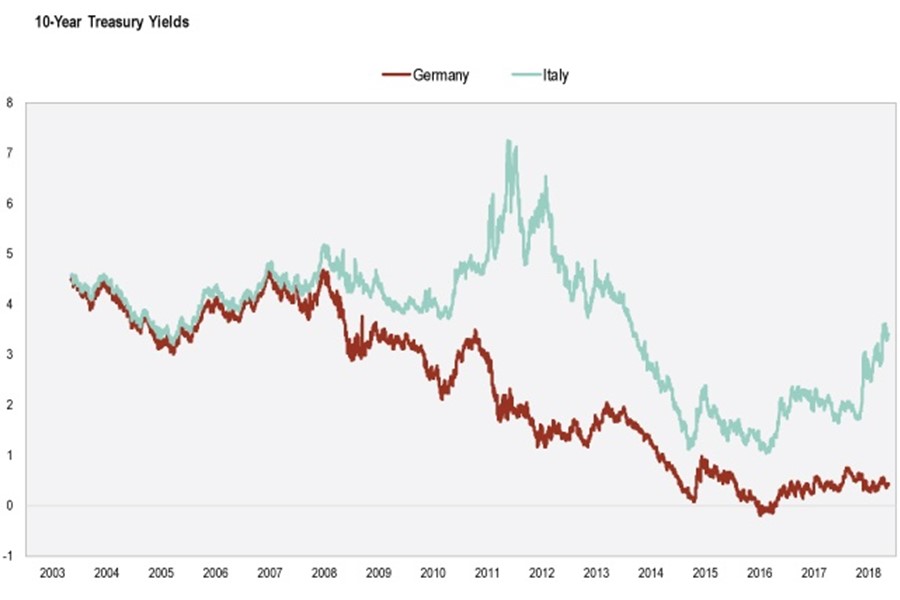 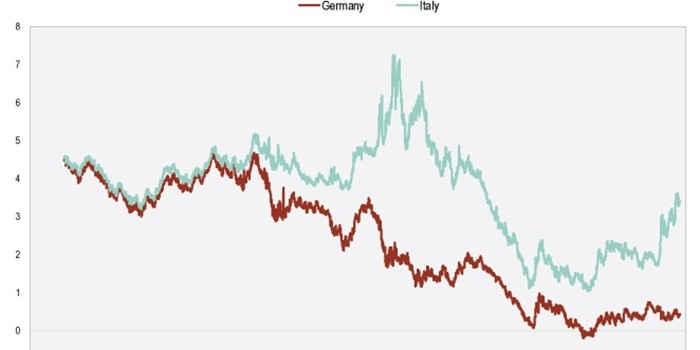 Since the inception of the euro near the beginning of the century, there have been plenty of bumps in the road when it comes to drawing currency valuation conclusions given the numerous fiscal regimes and differentiated economies sharing it (the Global Financial Crisis (GFC), the European debt crisis, the European Central Bank (ECB) bond buying programs, and today’s unemployment and growth struggles in countries like Spain, Portugal, and Italy).

Italy is badly in need of easing at a time when it does not control its own currency and therefore cannot do so through monetary policy.

This is unfortunate timing for Italy because the ECB is intent on embarking on a tightening path after years of post-GFC monetary stimulus, particularly as signs of growth in the Eurozone seem to be sustainable.

What’s good for Europe as a whole could push Italy into an unsustainable economic situation.

As the country’s political crisis and the budget standoff with the EU have grown, Italy’s sovereign debt has struggled.

Italian bond yields started to soar in May 2018, when markets got nervous over the possibility of Italy’s populist support threatening the unity of the Eurozone.

Since then, yields have continued to rise and currently stand around 3.4%, far higher than debt yields of other major Eurozone nations.

Extremely accommodative ECB policy has helped to stabilize the debt trajectory for Italy these past few years. However, there could be a real problem for Italian debt if the ECB steps away and is unable to act as a backstop if there’s a selloff.

If that happens, there may not be another buyer of the bonds because corporations and other financial institutions tend to flee in times of stress.

It doesn’t appear that the ECB will be so willing to fill a funding gap as they did with Greece in 2012. If this is the case, then tighter credit would ultimately result, slowing growth in the Eurozone.

Contagion fears can also exacerbate the situation. However, that seems to be less of an issue at the moment when looking at the debt markets in countries like Portugal and Greece, where the 10-year sovereign bonds have seen yields fall 9 and 74 basis points year to date (as of 11/9/18), respectively.

That said, in the case that Italy would leave the EU, it would have significant consequences for the entire Eurozone. Italy is Europe’s third largest economy and has a public debt to GDP of 130%.

An Italy exit may mean that other economically fragile countries are dragged along with it, thereby splitting up the EU.

All of this obviously will weigh on the euro and on Italian debt in the near future. We’re not there yet, but there are several effects of all this worth watching as the Italian political saga continues to unfold.