You have to love/hate the U.S. government — without them we wouldn’t have the Monthly Labor Review, underwritten by the Bureau of Labor Statistics (BLS) and other such illuminating research documents. Back in 2017 the MLR had a piece regarding “Estimating the U.S. Labor Share,” for example, and while we could also ask why our tax dollars are spent researching and writing such things in the first place, it seems in this case the conclusion of the report is an important one:

“… in the late 20th century — after many decades of relative stability — the labor share began to decline in the United States and many other economically advanced nations, and in the early 21st century it fell to unprecedented lows.”

The purpose of this blog is not to usurp the role of the many economists assessing this phenomenon in formulas and analysis, but rather to affirm the decline and proffer some logic-based potential reasons for it.

The BLS defines this term pretty simply — it is the share of output that is received by labor in the form of compensation. Take the total output for a period (gross domestic product) and divide into that the amount that is paid to those performing the work — in paychecks, bonuses, benefits, etc. and, voila, you have the labor share of output.  Naturally, as economists seek to do deeper dives into such data there are myriad adjustments and modifications to torture the simple into the complex, but we’ll stay basic and just ask the BLS and the U.S. Bureau of Economic Analysis (BEA) to take the lead on how to represent the information.

In addition, using a simple measure such as this one allows for a long data series (for the BLS it dates back to 1947) and for easy comparability across any economy that keeps any degree of credible information on the two topics of total output and compensation. When we look to the U.S. experience below, we can clearly see a long-term gradual trend of decline with a number of spikes and valleys until the 2002 recession, followed by a fairly precipitous reduction in the ratio with much less volatility along the way. While there has been some reversal recently, this is merely consistent with the general long-term pattern of the ratio rising into recessionary periods and then declining again during recoveries. 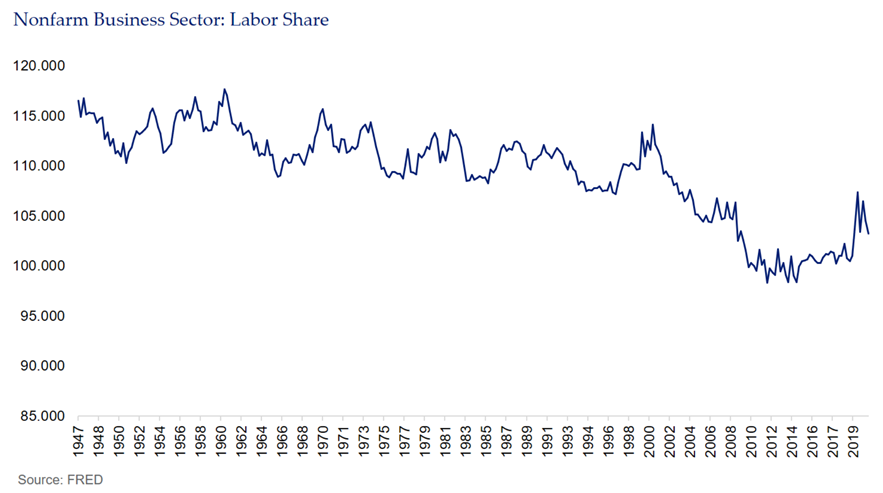 The stability of the labor share of output has been so consistent historically that economist Arthur Bowley penned what was known as Bowley’s Law:

“The general conclusion that there was no important change in the proportion of earned income to total income between 1880 and 1913 or between 1911, 1913 and 1924 remains. There is a stability of the various classes of income considered.”  Arthur Bowley, 1937.

Around that same time this was affirmed by the renowned John Maynard Keynes:

“The stability of the proportion of the national dividend accruing to labor, irrespective apparently of the level of output as a whole and of the phase of the trade cycle… is one of the most surprising, yet best-established, facts in the whole range of economic statistics, both for Great Britain and the United States.” John Maynard Keynes, March 1939.

Looking at the modern era post-WWII we can again see history confirming these economists’ observation with a great deal of consistency over the next 50-plus years.  Some downward drift, yes, and note how the graph above shows a consistent pattern of increasing labor share as we enter a recession, which then decreases as the economy begins to improve. This feature is largely due to some stickiness of jobs and wages at the early part of a recession, while the level of GDP actually drops at a faster level, giving a somewhat false impression that the economy is doing better while labor is holding its own.

Things changed in the early part of the new millennium and there was almost no recovery during the booming years post the 2000-01 decline. So when the global financial crisis hit, with no run-up pre-recession, the levels sank, as usual, but to very low levels. Now we can see some recovery as the economy improved, but shouldn’t we expect another post-recession decline in the near-term future? Where does this ratio end if the seesaw motion continues with this trajectory? If this pattern continues, we could likely see ratios that flatten out at the lowest experienced in the last 75 years.

Some thoughts on why Bowley and Keynes were wrong

Much has been researched and written regarding what has changed to upset Bowley and Keynes’ observations regarding the stability of the labor share of output. The two most consistent and reasonable conclusions are that technology has reduced the relative price of goods, which has led companies to employ more capital and less labor; and that the increase in imported inputs to domestic production has also lowered the costs, resulting in more output to go to capital and less to domestic labor (more to offshored labor, but lower overall). There was at least one expert who tied the decrease in labor’s share of output directly to the entrance of China into the WTO, which occurred in December of 2001, but this seems to be a bit narrow as the offshoring was a broader trend involving a host of emerging economies with lower labor costs.

Not the entire story, however

Although those explanations, technology and offshoring, certainly were important influences on our macroeconomic environment and changed the dynamic of the use of capital and labor, there is a deeper story that underlies the share of labor output: profits and income inequality. 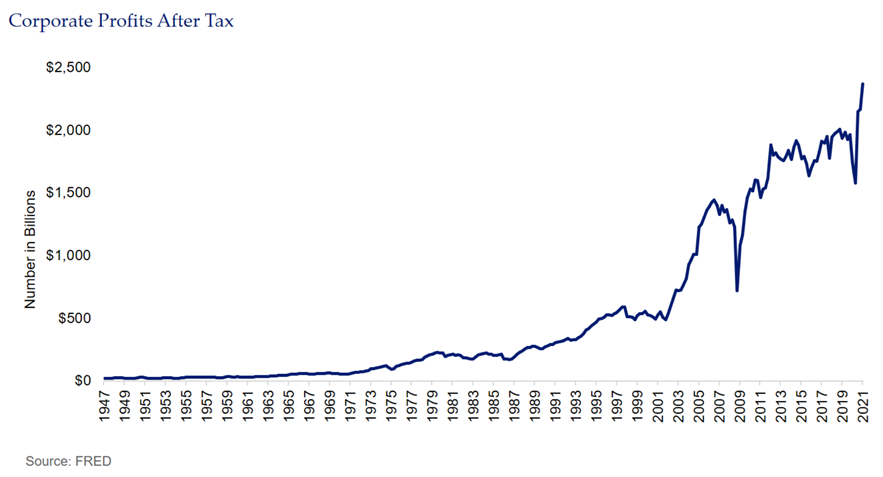 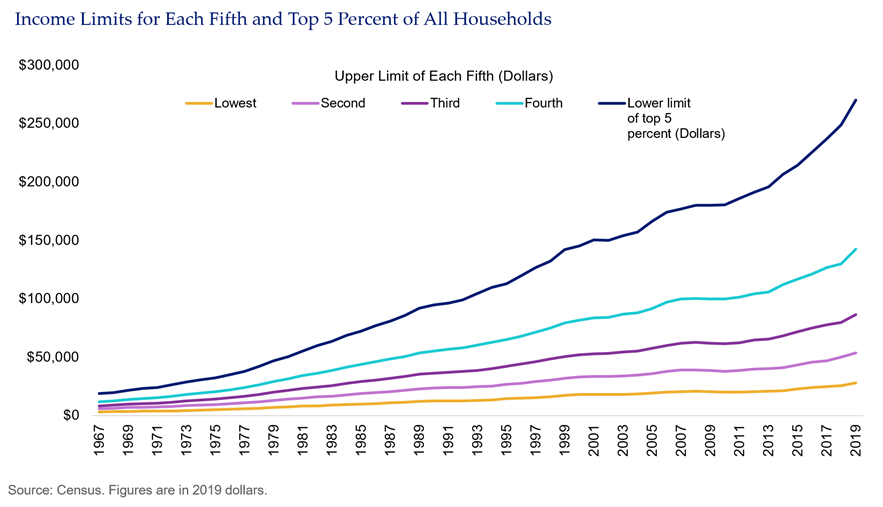 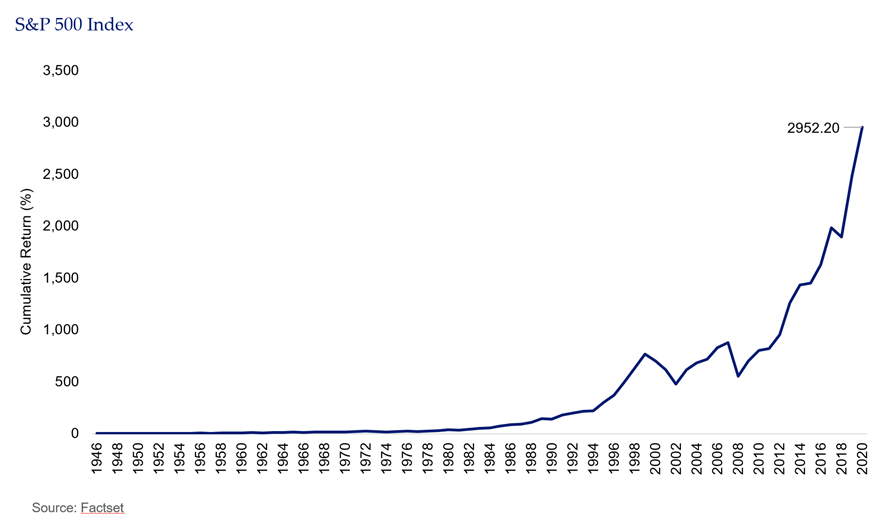 Perhaps the explanation lies in these three trend graphics. The observation that the dropping proportion of output accruing to labor is the inverse of these charts does not seem to be mere coincidence. Greater use of technology and the lower prices of inputs from onshoring created larger profits for U.S. (and many developed nations) companies. Those profits supported increased payouts to management and shareholders while the proportion of total income that compensated labor for their contribution fell. There are a number of beneficial implications of these realities, including overall balance sheets being supported via higher 401k valuations with higher share prices. Yet it does appear that the pendulum has swung too far for too long. Bowley’s law has been on life support, but it may be time for a heart transplant to return to a more vibrant and equitable economy.

Aging Defined Benefit Pension Plans and the Challenges They Face

What are these challenges? See how they affect your DB Pension Plans.

Did Big Ben Answer the Question?

The great inflation debate. Is it transitory? Or regime changing?

Q3 2021 Investment Outlook: A Rose by Any Other Name Would Smell as Sweet

The U.S. equity remains a solid performer. But the impact of COVID-19 resurgence creates a large unknown for equity markets outside the U.S.